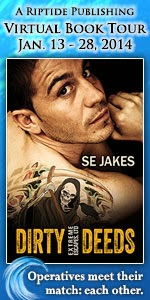 A brief break in our single-focused weeks to bring you... A guest post from S. E. Jakes!  This is a novelty for me.  I picked up one of her books last year, on a whim, actually, and really liked it!  I've told you all before (and probably will again... and again...) about the problems I have picking up books that aren't specifically recommended just for me, but I'm trying hard to expand my horizons - just to bring new and interesting things to you all!  Follow me through the jump, and get a quick glimpse into the mind of S. E. Jakes, and a brief look at her new novel, Dirty Deeds!

Hey everyone!!! Thanks to The Saucy Wenches Book Club for having me back here for my Dirty Deeds blog tour :)
Dirty Deeds is the first in this spin-off series of Hell or High Water. Dirty Deeds focuses on Cillian and Mal, two characters who’ve been in both Hell or High Water books 1 & 2 (Catch a Ghost and Long Time Gone.) Dirty Deeds # 1 captures a very specific moment in time for the Cillian (the spook) and Mal (the former SEAL in exile).

1) Introduce yourself! It's great to 'see' you here at The Saucy Wenches Book Club, Ms Jakes, tell us a little about yourself!

Hey there! Well, I’m pretty much chained to my computer these days, the way my readers like it. And honestly, I can’t complain, because best job in the world and I’m so lucky to be able to write full time. I’ve got two kids (one of them a high energy toddler) and my husband’s really cool with his support.


2) What brings you here? What drew you to the M/M genre, and what do you think sets you apart from other authors?

I fell in love with the genre with my first couple of m/m reads (thanks to Chris Owen and Lauren Baumbach) – and then JR Ward’s Butch and V got me even more interested. I started Bound By Honor (and Bound For Keeps) in 2009 and once I submitted Bound By Honor, it was full steam ahead. As for what sets me apart? God, this whole genre has some fabulous authors, so that’s a hard one. I guess I always write alphas with alphas. And military guys. And angst. I’m pretty consistent with that. I love reading books with twinks and non-military guys, but I can’t seem to write them.

3) Having read a bit of your earlier work, I've noticed that your characters seem to have a depth to them that grows the longer you read about them.  How do you create characters that stand apart without having them fall flat on the page?

Well, I’ve said this before (and no one’s strapped me into a straight jacket yet) but my characters really do appear and talk to me.  They arrive in my mind, named, with some backstory and they reveal more and more as I write.  So they’re so real in my mind—I think that helps a lot.  I don’t plot.  I let the characters tell me their story, because for me, characters always have to lead the plot.


4) What do YOU like to read? Left to your own devices, what would you pick up?

I read everything I can, always have, but now I get to say that I have to read for work. I do love memoirs and bios (especially rock stars / movie stars) but lately, it’s been all about the m/m fiction.  I like military guys, rock stars, tattoo shop owners.  Twinks. And angst.  There’s GOT to be a ton of angst.  And lots of sex.  Because, hello, sex and love make the world go round.

5) What is your favorite book?

6) Now, many of us have an author whose work, it doesn't matter what they've written, but when they release something new, we automatically buy it - without even thinking twice about it.  Do you have any authors on your auto-buy list?

Oh yeah—tons of them.  Along with the authors I mention above, there’s LA Witt, Kim Dare, Garrett Leigh, Heidi Cullinan, Rhys Ford. 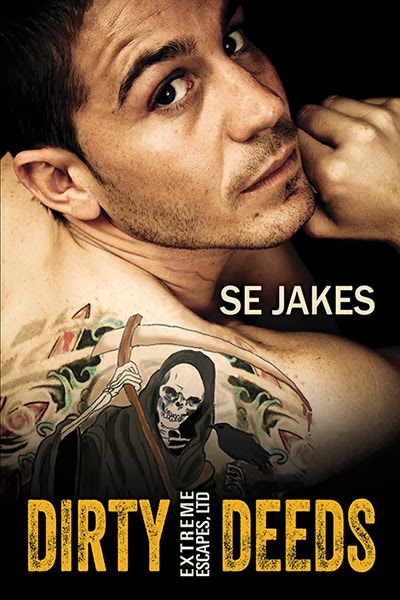 7) Your release of Dirty Deeds is coming up quickly!  Tell us a little about what will be coming our way!

Dirty Deeds is the first in the Dirty Deeds series.  It’s a novella, and it follows part of the same timeline as Daylight Again (which is Prophet and Tommy’s book 3)…Dirty Deeds 1 takes place over a specific four day period—I couldn’t take it any farther, because Mal and Cillian have work to do in Daylight Again and If I Ever.  And then, when it comes time for Dirty Lies and Dirty Love, those guys will be in their own story / plots.

Two seasoned operatives finally meet their match: each other. Cillian works for the mysterious Special Branch 20: an organization that runs black ops commissioned by the British government. His specialty is deep undercover assignments with virtually no support. He’s been alone for so long that he no longer knows anything else.

Mal’s also used to being alone. Wanted in several states and even more countries, he’s not allowed in the vicinity of any of his former Navy SEAL teammates. And his current assignment is to track Cillian in order to discover the spook’s endgame. Except he’s no longer sure which one of them is getting played.

Cillian isn’t about to let the mission that’s consumed him for the past several years crumble because an outsider is poking around where he doesn’t belong. But Mal forces his way through Cillian’s defenses— and into his heart—exposing a devastating betrayal that could destroy them both.

SE Jakes writes m/m romance. She believes in happy endings and fighting for what you want in both fiction and real life. She lives in New York with her family, and most days, she can be found happily writing (in bed). No really...