by: Zee the Terrible and Barbara Bones 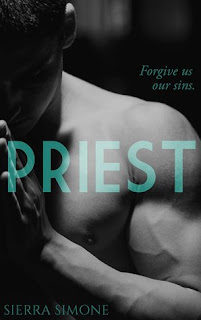 I stumbled across this going through the erotica tag on Amazon looking for something that would be next during my smut-only phase (I go through that sometimes, and nothing but smut will do.) I saw the word Priest, and the cover, read a bit of the sample... and bought it. Because yes, I have a thing for hot priests in books and movies, and I had a feeling I would enjoy the ever living fuck out of this one.

Halfway through it I knew just what to say to Barb to get her maybe a tiny bit intrigued by the book, at least enough to give it a shot. And it worked!

Priest had me hooked from pretty much the get go.

Several months ago, I broke my vow of celibacy on the altar of my own church, and God help me, I would do it again.


I am a priest, and this is my confession.

It wasn't just the cover, and the promise of some X rated Priest action, it was the realness of the characters. The The Walking Dead loving priest who talked to other fans about it online, who jogged to Britney Spears songs, the man with a past, whose lust for a woman's voice and not much else is what you first really get to know about him. Poppy, the privileged princess turned stripper, who wanted to do good in this world, and who is looking for answers anywhere in this new town. It's a match made in erotica heaven. I was hooked before I even realized it. And it wasn't just my inappropriate thing for priests.

I mean, if I'm honest, the forbidden factor had a lot to do with just how very HOT it was. Because..it was hot. I don't think I can emphasize enough just how hot it was. And it was PERFECT for my smut phase, I might even consider it THE highlight of my smut phase. But more than that, Tyler's journey in this was what had me invested.  A HUGE plus was this story being from his point of view, which is rare in good erotica, or good contemporary romance or drama. And what a point of view it was. I'll admit my fantasy is about being on the other side of the confessional, but being in Tyler's mind was eye opening.

One of the best things was how non stereotypical the characters are for a priest and a stripper. And the compelling reasons each has left their past lives behind and taken up the collar and the pole. I knew it was going to be oh so good after pretty much their first couple of meetings and Tyler using that voice.


"Of course. I'm looking forward to it, Poppy." I hadn't meant to say her name, but there it was and when I said it, I said it in that voice, the one I didn't use anymore, the one that used to have women dropping to their knees and reaching for my belt without me having to do so much as say please.


Tyler and Poppy give in to their nuclear attraction, and phew... it is insanely hot. And more than a little sacrilegious, much to our delight!

Things aren't easy for either of them, but especially Tyler. Because of his vows, because of what made him a priest, and because of his very genuine love for his congregation and not wanting to disappoint them. His dilemma felt real, and yet you understood why he gave in to temptation again and again. Even with the raging guilt it brought.

I do not have a thing for priests. I've never been to Catholic school and only occasionally been to mass. So I admit that I chuckled when I saw what Zee was reading and continued on my merry way. Then Zee told me how hot the book was, including some specifics and I was too intrigued not to check it out, tout de suite. And whoo boy it is filthy filthy hot. Forbidden almost-sex and actual sex in sacred places featuring a forbidden man with a dominant streak. It was definitely the highlight of smut I read this summer. But as I read I discovered that not only is it wickedly sexy but there is an amazing story in here.

I always roll my eyes at stories of priests and nuns who break their celibacy vows, and I'll admit that's mostly because I don't really get the point of celibacy vows in the first place. But being in Tyler's head as he struggled with his attraction to Poppy, seeing his battle between the church he loves and the woman he loves, I maybe got it a little bit. I'm going to refrain from commenting on traditions that are not my own, and I'll just say that I really respected Tyler's conflict between his faith and the most basic of human needs, love and intimacy. Ultimately, Priest was about the understanding that faith and devotion can take on many forms and living a chaste life isn't the only way to be devoted to God. What is more holy that sharing a life filled with love for someone else?

If you want to read a story that is deep, meaningful, and tells a character's very personal journey to self discovery and fulfillment, and full of sex so hot you pretty much need someone to hose you down every few chapters, Priest is what you're looking for. You won't regret it. You won't be able to help yourselves from rooting for Poppy and Tyler, regardless of your religious leanings. And the ultimate lesson this book left us with was that of love and acceptance, and maybe, at the end of the day, that's all that matters.

These Wenches rate it :