Man For All Seasons

I struggled a little when it came to figuring out which amazing person I want to fangirl about this time around. I think a lot of people are awesome for a lot of reasons, but I needed someone who was worth the time.

Talented, smart, compassionate, funny. All those things and more. Who could that be? And then it came to me.... Who else?!

I first noticed him on screen in 24 (the Keifer Sutherland tv series), just enough to remember him. And then Heroes came along. Anyone can tell you just how bone-chillingly awesome he was as Sylar.

My real love for him came with the 2009 Star Trek reboot. I LOVE TOS. To pieces. Leonard Nimoy IS Spock to me. So I was more than a little apprehensive about some pretty boy trying to take over. (I get weird when I'm worried.) But I also heard that Nimoy himself was happy with the casting, so I kept my mouth shut and watched the movie.

Every single thing about it.

ESPECIALLY Quinto's Spock. He was everything I loved about Spock and more.

It takes an insanely talented person to bring to life a character who is (at times) as coldly logical as Spock. And inspire people to root for him. But Quinto accomplished that. He was heartbreakingly vulnerable when needed, cold and calculating at times, and always a pleasure to watch.

Is it any wonder that Nimoy totally supported this reincarnation of his character? 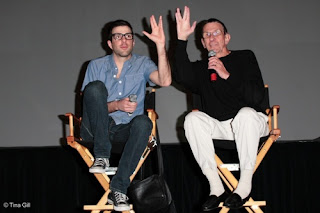 For those of you who watched the recent Star Trek Into Darkness movie, I don't really need to tell you just HOW amazing he was in it. He gave me chills. And he kicked ass. Watching him (and Chris Pine too) act on screen with Benedict Cumberbatch was an awesomeness overload. My mind almost couldn't comprehend what was going on. It was epic.

His other amazing roles that had me standing up and applauding, from my living room, were his two roles in FX's American Horror Story.

In season 1, he played Chad Warwick, the original owner of the haunted house, who was destined to spend eternity with a man who didn't love him. Although he wasn't in all the episodes, his story line and scenes were what kept me interested.

How could you not love Chad? Poor guy. He was wonderful, and a little sassy! He deserved better. Quinto was the one of the most memorable things for me in season 1.

And then came season 2, American Horror Story: Asylum. I have to say, Zachary Quinto blew my freaking mind in season 2. I highly recommend the second season, even if you hated season 1 or haven't watched it.

I'm not going to spoil anything for those of you who haven't seen it. Suffice to say, Quinto as Dr.Oliver Thredsen was just amazing. I could not take my eyes off the screen when he was on it. Brilliant performance. Absolutely brilliant.

While I could go on about his many amazing performances, there are other things that make him much more than just a great performer.


I admire any famous person who takes the time to make these "It Gets Better" videos. They make a difference to so many people. When I first saw his video, I had no idea he was gay. He publicly came out in 2011.

Now let me be clear, I do not think the sexual orientation of celebrities is anyone's business. They have a hard time keeping their private lives private, and I can see why they would choose not to share their lives with the world. Which made it all the more admirable that he came out, and the reason why. You can read his blog post about it on his own official site.


...i also made an it gets better video last year — in the wake of the senseless and tragic gay teen suicides that were sweeping the nation at the time. but in light of jamey's death — it became clear to me in an instant that living a gay life without publicly acknowledging it — is simply not enough to make any significant contribution to the immense work that lies ahead on the road to complete equality.

...now i can only hope to serve as the same catalyst for even one other person in this world. that — i believe — is all that we can ask of ourselves and of each other.


Just, wow. Hats off to you, Zachary. He has said in interviews that he wants those gay kids and teens to see that you CAN be a successful, happy individual despite all the bullies and assholes saying otherwise. There IS a better life for you. It DOES get better.


He said he did so because he felt "there's still so much work to be done" in the gay community. His public admission of his homosexuality inspired others to do the same, and Quinto now says that he wanted to do whatever was in his power to make others feel safe coming out.


Honestly, there isn't much I can say about what a wonderful thing he did, because just thinking about it chokes me up a little. I KNOW he has made a difference in SO many kids' lives. He will continue to do so by just being himself.

I could go on, and this post would get a little out of control, so I'll keep it short.

He's one half of my absolute favorite bromance.

These two are beyond adorable. And hilarious. Their interviews are worth the watch. Trust me. Search YouTube... you'll be lost for hours. I regret nothing!

He is hilarious. I love people who have the ability to not take themselves seriously all the time and be silly! (Star Trek 2009 bloopers... watch them, you'll get it.)

He and Leonard Nimoy are, by all accounts, good friends. And they hang out and make each other's lives difficult if this hilarious Audi commercial can be trusted.

He has GREAT hair. I mean, seriously, I have a bad case of hair envy. I wonder if he does anything special to keep it that way...

He loves dogs! Look at him with his adorable pooch. (We don't share paparazzi pics, so this was the only one I could find!)


Okay I'm done for now! I think everyone will agree with me that it's totally understandable to fangirl over Zachary Quinto. Til next time: