Review: Recipes for Love and Murder

Last week I found a book recommendation on my Facebook wall. Something in the book’s name called to me, so I read the sample and fell in love with Tannie Maria: her life, her mind, and her superb cooking abilities. The story — which combines a murder mystery and suspense with life in a rural town, strong friendships, a lot of delicious cooking, and a dash of romance — takes place in Klein Karoo. This is an area in South Africa (klein means small in Afrikaans), situated between majestic mountains, not far from Cape Town. I invite you to join me in visiting what is for me a new corner of our world, while trying to solve this murder and salivating over mouthwatering descriptions of food. 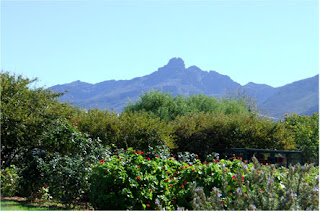 Meet Tannie Maria, a widow in her fifties who likes to cook, to feed people, and to eat. (Tannie is similar to Auntie, often used as a respectful and affectionate form of address.) She is a firm believer in comfort food, and her food is a cure for everything that is wrong — for stress, for pain, for negative emotions, for any kind of illness.

Bananas, I thought. They are very healthy, and would help her get strong again. How about frozen bananas, dipped in melted dark chocolate and rolled in nuts.

What a special kind of heroine: not young, not stunningly beautiful. A woman who enjoys a piece (or two) of cake or biscuits with her coffee or tea, without feeling guilty about it. She has a very distinctive voice, kind, straightforward, with an inner strength.

I’m short and soft (a bit too soft in the wrong places).

Tannie M. writes a recipe column in the Klein Karoo Gazette under the name Maria Van Harten, alongside her friends Hattie the editor and Jessie the journalist. She lives by herself in a house with a big yard and a few chickens. Her life is simple and quiet; she loves and knows the land (veld in Afrikaans) and the wildlife around her, trees, flowers, bushes, and animals, big and small.

One day Hattie tells her that the Gazette’s head office decided that her column must be changed to love advice. Tannie M. knows very little about love. Her late husband, Fanie, was abusive, and her life with him was unhappy and loveless.

God, faith, love went out of the window in my years with Fanie. I’ve left the windows open since then, but they haven’t come back in.

Well, she knows a lot about food, so her new column perfectly pairs answers to questions sent to her by readers with recipes. It is both simple and hilarious. Here is how she replies to a man asking how to slow down his lovemaking, because he gets so excited with his newfound love that sex ends in 2 minutes.

Here is a way you could slow yourself down. Memorize a good recipe, then say it inside your head if you are getting overexcited. This should distract you enough to make it last longer, but still keep your mind on something delicious.

One of the letters comes from a woman named Martine, asking for advice concerning her abusive husband. Tannie M. tries to help her as much as she can, but then Martine is found dead and our mystery murder begins.

Tannie M. is a compassionate woman. She can’t let this murder go unsolved. She needs to help in the investigation, and she brings her two loyal friends, Hattie and Jessie, much to the dismay of the hunky chief of police and his crew. I guess you don’t expect me to solve the murder for you right here, but I’ll tell you that the plot is a mixture of vivid, suspenseful, and amusing, all blended together just right.

Food is a good company, but it doesn’t answer back, not in words anyway. Maybe that is one of the reasons why it is good company. But it did communicate with me somehow, because next thing I knew I was polishing off the leftovers of the cream and mint potato salad.

Now to the charming set of supporting characters who are very well defined, animated, and colorful:

Jessie Mostert, the ambitious young investigative journalist, is Colored, which is the South African term for mixed race. Her racial issues with her white boyfriend are well treated in the story. I love her gecko tattoos. She is fierce and loyal, and has an investigative mind.

Harriet (Hattie) Christie, the Gazette’s editor, is fifty-something like Maria, very English, tall and thin, and a terrible driver. She is prim and proper, the responsible one, and a very good friend to Maria.

Then I heard a screech of brakes and a bump and I guessed it to be Hattie, she’s a terrible driver. I peeked out and saw her white Toyota Etios snuggled up to a eucalyptus tree in my driveway.

Detective Lt. Henk Kannemeyer is in charge of the murder investigation. He is a good guy, big and authoritative. He wishes that Tannie Maria would stick only to her cooking.

Konstabel Piet Witbooi is Kannemeyer’s police assistant. He’s a bushman, a little guy with exceptional tracking skills, who saves the day more than once.

South Africa is a vivid character itself, a fascinating landscape. It is easy to get the sense of local life in an area that is quite unknown to me through Tannie Maria’s words:

The sun was high and the shadows in my garden were small. I looked out across the veld (field or grassland) onto the Rooiberg. The mountain slopes were reddish-brown, sprinkled with brown and green bushes. In the place where the top of the red mountain met the blue sky, I could see wobbly lines. It was so hot, the mountain was starting to evaporate.

I felt the undercurrents of the racial issues in the story. There is mention of Nelson Mandela and the love the people had for him.

The story takes on the problem of abused women, which is not exclusive to South Africa, but is a worldwide issue.

There are many Afrikaans words and idioms used in the book, some words are even written differently, but you shouldn’t let this discourage you. I think it adds to the African atmosphere of the story. Here’s a primer for a few of the words you’ll read more than a few times:


This is a delightful tale — a murder mystery, yet tender and funny. Be careful to read it only after you eat, because the delicious food will make you HUNGRY. But fear not, if you get a craving, you’ll find Tannie Maria’s recipes at the end of the book!

For example, try this lovely treat. It is light, sweet and fluffy. 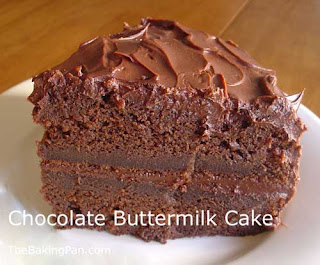 This Wench rates Recipes for Love and Murder:

* The scrumptious label is particularly appropriate!