By Zee the Terrible - December 05, 2014
This Fangirl Friday, I'm going to keep it short and sweet! I'm sure our lovely readers are busy with the Holiday season, and recovering from their long Thanksgiving weekends last week. We could all use some man candy right about now!

So this week, ladies and gents, I will Fangirl about the very, VERY sexy, Gerard Butler! And this particular post is dedicated to my love, the very lovely Wench Beta! Arguably one of the biggest Gerry Butler fans I know! (And she happens to be one of my favorite people.)


For me, it all started with a movie called Dracula 2000. I know... doesn't sound very promising, but I loved it when I was younger, and that had everything to do with Gerard Butler. I gotta say, he was a pretty sexy Dracula. I didn't understand why on earth Mina would ever want to say no to him.

But I think the moment I (and Wenches Barb and Beta) REALLY fell for the awesomeness that is Gerry Butler, was in The Phantom Of The Opera. Yes, I know. A lot of people were not a fan of the casting, but I never really cared one way or another until I watched it. But there were lots of people who just didn't care for him as The Phantom, mostly because he was too attractive. (Totally understandable btw.)

But really, he had me from the get go. Once he sang a few notes, I was a goner. I loved him!

I've mentioned in my old Villains Man Candy post how the original Phantom is an unhinged psychopath, which they REALLY watered down in the movie, but who better to make you love a creepy stalker than Gerard Butler? (I would like to clarify, creepy stalkers are gross and I'm not one for romanticizing any form of that behavior... I just mean he's pretty to look at and lovely to listen to, and you felt twinges of pity for the guy because Butler played him so well.)
Then came 300 and everyone lost their shit. I mean, I don't blame them because..well, all the abs for one thing.

It seemed like Butler was born for the role of King Leonidas. Not just because of his glorious muscles, but because you could totally see why he was such a great leader (and husband). One of Gerard Butler's best roles to date for me! (Even though the media pretty much reduced it to "WERE THOSE YOUR REAL ABS!?" Predictable.)

He was great to watch in RocknRolla, kinda awesome in Nim's Island, hilarious and sexy in The Ugly Truth, AMAZING in Law Abiding Citizen, and who didn't fall in love with Gerry in P.S. I Love You?? (Anyone? I don't think so.)

Every time I think I'm over him, he does the sexiest and/or dorkiest thing, and I'm back. Like the adorkable (and still somehow arousing) dancing in P.S. I Love You.

The video above, for your viewing pleasure.

Or the VERY smooth and sexy moves he displayed in The Ugly Truth. SWOON!

He looks beyond amazing in a kilt! (The Wenches have a weakness for men in kilts! Wench Merit wrote a great Fangirl post on kilts a while ago!) 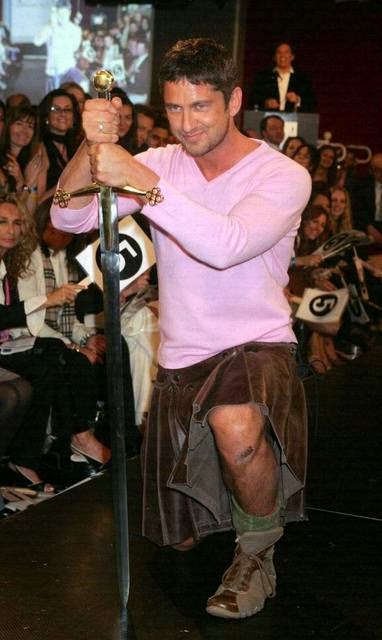 It would be a travesty not to mention one of my favorite things about him. Which is his world class ass. Two of the movies that blessed us with his glorious ass were Law Abiding Citizen and 300. (Head Wench Barb will appreciate these!)


I've lost my train of thought now. Honestly there's lots more I can say about the awesomeness that is Gerard Butler. His sexy accent, his soccer skills, his wicked sense of humor. How amazingly hot he looks in those Boss commercials, and tons more. But everyone's usually low on time this season so I don't want to give you more to read. So here are some more irresistibly sexy gifs!

What about you readers? What are some of your favorite things about Gerard Butler? Feel free to share with us in the comments!

ALL gifs are from Tumblr and do not belong to the Wenches.
Fangirl Fridays Man Candy Wench Fun