So I was thinking who would be a great person to do a post on and all I kept picturing was Karl Urban. Was this because he was a Kiwi doing well out in the big wide world? Is it that he is just plain hot? Or is it that I always picture him in my head as one Mr. Ty Grady from The Cut & Run series? I think it's a combination of all three. I am ecstatic that he is doing so well on the international stage. So let's celebrate why Karl Urban is one of my main men to drool over.


I remember watching Karl in Shark in the Park, Shortland Street and Xena:Warrior Princess. Very popular shows here. I have to say I'm showing my age a bit as he was in some of these shows twenty years ago. OMG I was still in high school!!!! I guess the turning point was being in the Lord of the Rings trilogy. This propelled some of the local talent here onto the international stage and of course conventions are a great way to get even more exposure and build up a fan base.

﻿﻿﻿﻿﻿ The Bourne Supremacy (yes I've read the book as well and it was very good) was where I really sat up and took notice. Urban looked like a lean, mean fighting machine and who wouldn't be racing to get his attention. Oh, I forgot for a moment he was playing a killer who was trying to kill Jason Bourne. Drat. It's not real, Angela, you can calm down. Now when I look back on the movie, there are certain screenshots that give a glimpse of how I picture a certain Ty Grady in my head and that makes me happy.﻿﻿

﻿﻿There was also the lucky inclusion of Karl in the fantastic Lord of the Rings trilogy as Eomer. I don't know if I was completely down with the blond wig, but hey, they were fantastic movies and he got to play an elf.

It's Abigail Roux, though, that I have to thank for moving my admiration of Karl Urban from a local doing, well, to a bit of an obsession. Oh, not in a stalky, camped outside his house kind of way, but in a, I so want this series to be made into a movie or TV show kind of way. Yes, apparently he lives in the same city as me, but my level of obsession hasn't quite reached out of control portions. Yet! Of course I'm talking about the Cut & Run series, which a few of us fangirl over in these parts. I had never encountered anything quite like fangirling until I encountered this fandom. When I first read Cut & Run #1, the series wasn't as popular as it has become in the last 18 months. What continues to amaze me is the dedication and the production of fan art that so many wonderful, talented people are able to create. I'm pretty computer illiterate myself. I try to do the odd thing, but it's very odd and not of the calibre that so many talented followers can do.

As soon as I started to picture Karl Urban as Ty Grady I was a goner.  He is perfect for the role. He has the right smirk, right level of playfulness and is sexy enough to do the role.  Sure, it's highly unlikely it would ever happen, but in fangirl heaven it really, really could.  Oh you Jensen Ackles fans shush, I know you want him to be Ty. Looking at you Wench Anne. I know we disagree on this one, but more Karl for me and Jensen for you.

Of course added to the allure of Urban is the fact he played Dr. Leonard "Bones" McCoy in the reinvented Star Trek franchise. While I wouldn't consider myself to be a trekkie so to speak, I have watched a lot of Star Trek TV shows. I of course think Urban has the perfect look for "Bones". Plus it's easy to tell his eyebrows had a lot of landscaping.

Next up Urban is on the screen in TV show Almost Human by the amazing J.J. Abrams. My fingers are crossed that it's going to be a great series. It's been a while since Urban has done any TV, but with Abrams at the helm, I have the feeling the show will be compelling. Urban is going to play one John Kennex, a cop in the near future who is teamed up with an android to solve crime. 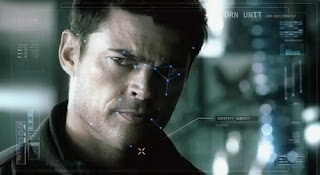 Do I snigger slightly every time I hear a Kiwi doing an American accent? Sure, maybe a little bit. But it's all in good humour and I'm delighted that one of our own is doing so well!!!! So join the campaign for Karl Urban to play Ty Grady. You won't be disappointed. I know I've only mentioned a few of the great movies and television Karl has been in, but I just wanted to give you a taste of his greatness.

Do you have "one of your own" who is doing well internationally? Let's promote a little bit of national pride and sound out below someone you want to pat on the back. Or like us Cut & Run fans are you hanging out for next year and the next installment in the series?