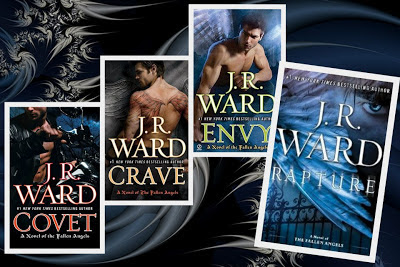 Out of the wickedly inventive imagination of #1 New York Times bestselling author J.R. Ward comes a world where sin and salvation collide in a battle for the future of mankind — where a cynical fallen angel struggles against the seven deadly sins and a demon’s lure over seven chosen souls...

Mels Carmichael, reporter for the Caldwell Courier Journal, gets the shock of her life when a man stumbles in front of her car outside the local cemetery. After the accident, his amnesia is just the kind of mystery she likes to solve, but she soon discovers they’re in over their heads with his past. Over their heads with passion, too...

As shadows walk the line between reality and another realm, and her lover’s memory begins to come back, the two of them learn that nothing is truly dead and buried. Especially when you’re trapped in a no-holds-barred war between angels and demons. With a soul on the line, and Mels’ heart at risk, what in Heaven — or in Hell — will it take to save them both?

Redemption isn't a word Jim Heron knows much about — his specialty is revenge, and to him, sin is all relative. But everything changes when he becomes a fallen angel and is charged with saving the souls of seven people from the seven deadly sins. And failure is not an option.
~ J.R. Ward, Rapture


Intrigued by this description of the latest installment in J.R. Ward's Fallen Angels series? Keep reading to see whether I thought the book lived up to the hype!

J. R. Ward sure knows how to create a setting. The story begins in a cemetery, which is all kinds of awesome, and grabs the reader's attention immediately. The opening line:

Grave. And not as in serious. As in headstone and freshly disturbed earth, as in body down under, as in ashes to ashes, dust to dust.

Rapture is the fourth book of a seven-part series, which pits Jim, a brand-new fallen angel, against Devina, the devil. Before I get into the plot of Rapture, I'd better give you a little background information. Jim and Devina are adversaries in a "contest" to win the souls of seven people from the seven deadly sins. After Covet, Crave and Envy, Jim is up 2-1. The stakes are very high, since the fate of the world hangs in the balance. No pressure, Jim!


Reporter Mels Carmichael hits a mysterious stranger with her car outside a cemetery. She visits the man in the hospital and attempts to help him recover his memory. The only name he knows is Jim Heron, whose tombstone he saw when he woke up in the cemetery. Mels puts her reporter skills to use, and soon she and the amnesiac victim are in over their heads. They're also very hot for each other — I know, shocker! The man's past sins have been wiped away because of his amnesia, and it's interesting to see how he's affected once he gets his memory back and discovers the person he used to be.


Jim is trying to find out who will be Devina's next target, while striving to find a way to save his beloved Sissy. For those who don't know, Sissy is a young woman who was taken by Devina in Book 1. Jim has been obsessed with her and is determined to rescue her. He's also fighting off Devina's schoolgirl crush after sharing some angry hate sex together. Rhawr! His preoccupation with Sissy puts his mission in jeopardy. Is Sissy his HEA, or is she Devina's secret weapon to win the game?


Speaking of Devina, she's in therapy, and it's kind of funny seeing her try to deal with her OCD and hoarding issues while keeping her therapist in the dark about her true identity. I love how Ward makes Devina's character more than just flat-out Evil. We get to see her vulnerabilities and insecurities, which make me sympathize and love her badgirl self.


Jim's helper and fellow angel, Adrian, is still trying to deal with the death of his best friend, Eddie, and he's in rough shape. It's hard for him to provide backup to Jim when he's so unstable. He makes a huge sacrifice in this book. *sobs* This is just heartbreaking to read! Seriously, he breaks me up! I love him!


Dog is back, and we get to know more about him. I knew he wasn't just an average pooch! I can't wait to see how this news impacts the next book. You see how I'm not giving out all the goods, spoiler whores! Mwahaha!


There are some overlaps with Ward's other series, the Black Dagger Brotherhood. Both series are set in Caldwell, New York. One of the souls saved by Jim is someone we met in BDB. Mels is a reporter at the same newspaper Beth used to work at; in fact, she uses Beth's mug! Another angel is referred to, whom Ward has confirmed is Lassiter. She has also said that going forward, there will be more crossovers and cameos. I read somewhere that at some point there will be a big collision between the two series, but I don't know if that's true or not. I think if we asked J.R., she would put on her blue smurf robe of silence.


I'm enjoying the Fallen Angels series more with every installment, probably because I love the recurring characters, especially Adrian. Since Eddie is/was an angel, I hope he'll be back at some point. I'll bawl like a baby then, for sure.


Character development, rich and dark settings, gripping plots — the Fallen Angels series is another winner from J.R. Ward, and Rapture is a worthy new addition to it.

Have you read J.R. Ward's Black Dagger Brotherhood and Fallen Angels series? What do you think? If you are a BDB fan, would you be more likely to read FA because of possible crossovers?
J. R. Ward Reviews The Best Books You Aren't Reading